Update 18 May 2018 – As of this week I’ve withdrawn my app from the App Store. It’s had a fabulous run with over 550 sales, however in order to keep up with changing iOS requirements it will require expensive upgrades for which I cannot justify the cost on top of the annual App store fee. Still, I will leave this post here for those of you who may wish to pursue this route. My app was hand coded back in 2013, but I’m sure there are simpler tools available these days which will make keeping up to date simpler and cheaper! Enjoy the post!

If you’d told me this time last year that 12 months on I’d have an interactive iPad App version of my picture book Ferdinand Fox’s Big Sleep for 3-5 year olds in the App Store, greats reviews from four educational app sites, and almost 1,500 downloads during its free promo launch, I’d have rolled my eyes at the joke. Or, now I think about it, would I? After all, I am an indie author – and I of all people should know that once we get an idea in our head there tends to be no stopping us! 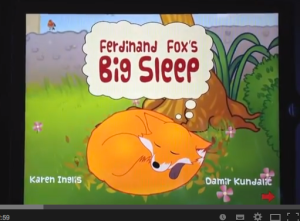 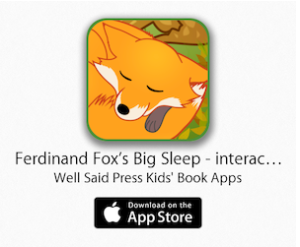 Creating an app wasn’t my original intention I have to confess. In fact I don’t think I really understood what a ‘book app’ was until earlier this year, never mind how to find one! I was simply looking at how to turn the print book of Ferdinand Fox’s Big Sleep into a colour eBook.

It was my friend Bridget who – struck by the vibrant illustrations – said, “Why don’t you see if you can turn it into an app with simple animation?” Once I had the idea in my head it wouldn’t go away – a bit like the beautiful fox I first saw one misty November evening over 15 years ago, which inspired my Ferdinand Fox stories to start with….

So what exactly is a book app?

If you’re not sure, you are not alone! There’s understandable confusion about how a book app differs from an eBook. And with enhanced eBooks now in the mix, the boundaries continue to blur. Below is a quick and basic summary but feel free to comment if I have anything wrong.

eBooks are digital books that tend to be read in a linear fashion and can include limited interaction, such as audio or (in the case of enhanced eBooks) video, word highlighting or automated animation, depending on the device being used. They are formatted as ePub documents (or Mobi/KF8 for Kindle or iPib for Nook) and you read them either on dedicated eReader devices (Kindle, Nook, Sony, Kobo etc range of eReaders) or using eReading apps, which are produced by all of the eBook retailers and work across their own and their competitors’ mobile, tablet or desktop devices. The exception is Apple, which doesn’t have a dedicated eReader and doesn’t share outside its devices – instead you use their iBooks app to read books from their iBookStore on your iPad, iPhone or iPod Touch or using iBooks software on your Mac.

A Book App is in essence a software program coded to run like a book. Book apps generally have much more interaction than eBooks. So while both include page turning and (with some eBooks) audio, sound effects and (with some iBooks) word highlighting or automated animation, Books Apps can include touch activated animation or drag and drop movement, touch activated sound effects, reader recording facility, photo taking, games, puzzles and much more. Some book apps run on both Apple and Android devices and so are available in both the App Store and the Google Play store (Android apps are also housed in the Nook App store in the US). From what I can see, however, the vast majority of kids’ book apps are found on Apple’s App Store. Some of these apps run on both iPhone and iPad, while others work on just one or the other. (Ferdinand Fox’s Big Sleep runs on iPad only.)

Ferdinand in the App Store at launch! 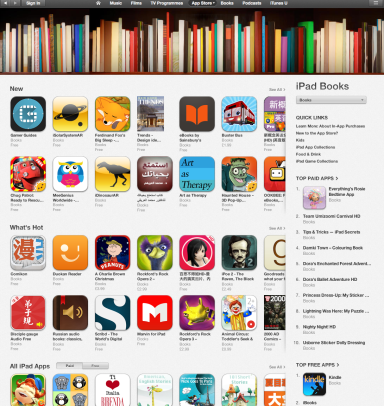 How I planned my book app

I spent a lot of time browsing the App Store and downloading free and paid children’s book apps to see how they worked and what features they offered. Some apps I immediately loved – such as Nosy Crow’s wonderfully sophisticated Cinderella and The Three Little Pigs stories. Others felt more like ‘games’ than storybooks, or even like mini TV movies – though in hindsight I may have been looking in the wrong App Store category. (I shall be blogging separately about how hard it is to find and navigate the App Store!) Nevertheless it was useful to see what interactivity all of these children’s apps offered – and in particular to see how they dealt with page turning, help menus, navigation and social media sharing – everything that I would call ‘customer experience’.  I made copious notes and sketches about what I felt worked and what didn’t. (My experience observing website usability testing over the years certainly helped me come at this with a critical eye.)

I knew early on – and more than ever after my research – that I wanted my book app to feel like, well, a book app! Not a game and not a mini interactive film. I wanted it to offer parents and children the shared reading experience of a print book (book style layout with turning pages – and to that extent an eBook) combined with the kind of simple yet fun educational interactivity that I knew was beyond the capability of an eBook. It was also important that my target audience of 3-5 yrs should be able to enjoy the book alone using a ‘Read to me’ option, as well as having a grown-up read it to them.  Since the story uses quite sophisticated rhyming text I didn’t intend it to be a book to learn to read with – though I know already that older siblings and parents / grandparents do enjoy reading it to themselves!

I wanted my app to look and feel like a book 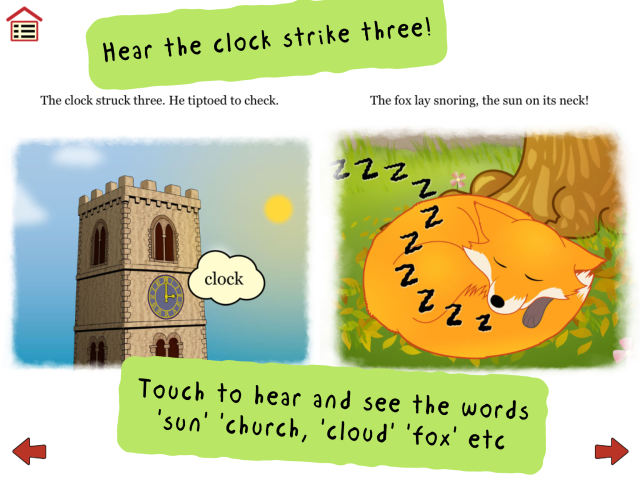 NB: The green labelling only appears on the marketing screenshots – not the app itself.

3. Getting estimates from app developers

Once I had an idea of the sorts of interactions and menu configuration I wanted my next step was to get some estimates. Figures I had heard bandied around at the 2013 London Book Fair suggested that development costs for children’s book apps typically run into tens of thousands of pounds (or more!). However, I had a hunch there would be indie app developers out there offering reasonable rates in order to make a name for themselves.

So, after contacting a few children’s app developer sites via Google – and being quoted thousands of dollars! – I decided to post the job on Elance.com. I was upfront that I had a budget in the hundreds rather than thousands of pounds and that this may well mean I couldn’t take the project forward. Then something unexpected and extremely welcoming happened: as well receiving a range of quotes from India, Europe and the USA of between $2,000 and $30,000 I was contacted separately by two developers – both in the UK – who offered to do the work for free, or almost free!  In each case they felt it worth it in return for the experience and exposure it would give them. I’m sure it helped that I already had my completed print book on sale, with RGB images ready to re-use, and a presence and audience. Budgets aside, the idea of working with someone in the UK – even at a distance – was the icing on the cake with this offer. I had no understanding of how coding worked, and to know I’d be able to pick up the phone for a discussion in the same time zone if things got too complicated was extremely reassuring.

I should add that I insisted on paying a modest (given the time spent) but not unreasonable fee for the finished product – far less than I’d have paid on the open market, but enough to show my genuine appreciation to my developer at EastYorkshireApps.co.uk for his time and effort.

Through my research of other apps I knew I wanted to include the following features as basics: 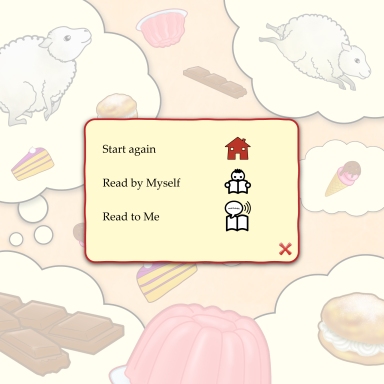 Navigation menu – accessed from the ‘home button’ on every page.

In addition I wanted to add learning opportunities to help with basic word and object recognition. I’d not seen this in the story books apps I’d come across in my research but it felt like an obvious enhancement that parents and children could enjoy (or choose to ignore depending on the moment).  So, building on the ‘sleeping and dreaming’ theme of the print book, I came up with:

For each word bubble there is an MP3 voice file that plays as the bubble appears.

For younger children the learning comes with associating the spoken word they hear with an image they (or their parent) touch. In this sense the app offers an extension to the way we interact and talk with our children about what we are seeing when sharing picture books with them. For the pre-reading age (4-5), the word bubbles allow children to start to recognise words and, ultimately, letters and spelling.

Both of these aspects are consolidated in the Drag and Drop Matching Game at the end. See an excerpt below.

Finally – and just for fun and again not seen elsewhere – I had wanted to add a ‘This book belongs to’ page to match the print book, where the children (with help from parents) could type in their name.  In fact my developer trumped that idea by adding the facility to take your own photo and have it appear on the page inside a bubble along with your name – see the example below where I took a picture at a local school visit last week!

Take a photo and type in your name – change as often as you like! 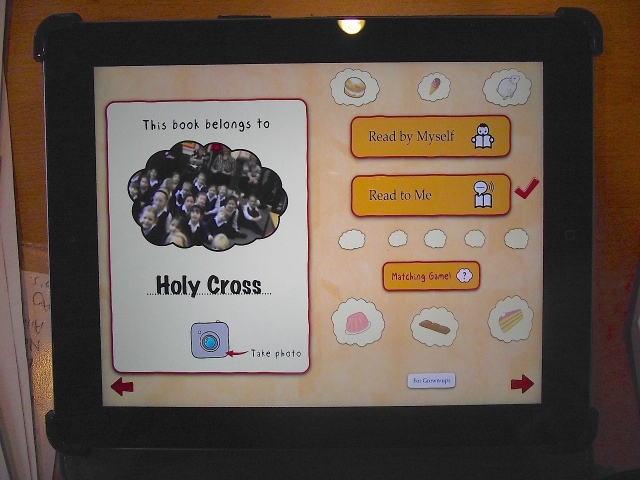 Take a photo and enter your name! Change as often as you like! Holy Cross School, Kingston, in November.

I shall do a follow-up blog post to give more detail on some of the keys aspects of below, but here’s a shapshot of what we did. (OK – snapshot isn’t quite right word!)

This blog post is one element of my longer term marketing strategy, of course! I shall be adding two further posts shortly. The first will explain more about how to use GarageBand to make audio files. In the second post I’ll talk about the challenge of marketing children’s book apps (especially when most parents don’t understand what they are or how to find them!), including the problems I have had understanding and navigating the App Store. I’ll also give an update on marketing progress.

7. Please help Ferdinand get noticed in the App Store 🙂

Best wishes and all for now!  🙂 Karen

This site uses Akismet to reduce spam. Learn how your comment data is processed.